Since the projects I'm currently working on will most likely have me busy for quite some time and any updates on them will probably be few and far between for a while, I was thinking from time to time maybe I'll post some small art projects I did during the time I was absent from the blog.

To start off, here's some digital art I made a few months ago to commemorate Superman's 80th anniversary.  I whipped this one up pretty quickly, over the span of a couple hours from start to finish, but I'm pretty happy with how it turned out. 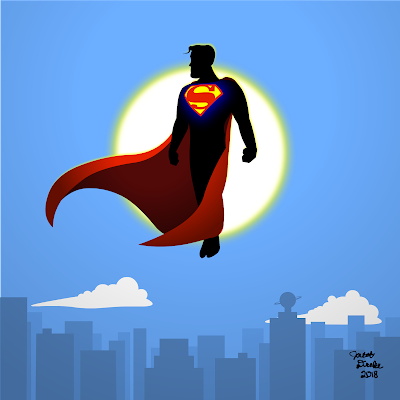 Posted by jacobdrake at 5:52 PM No comments:

Well, would you look at that?  It's been forever since I last sat down and really wrote anything in this blog.  I'm well aware that it's not the first time this has happened and I always say I mean to write more.  And I do.  I really mean to write, I want to.  The thing is, life has been crazy for a while now.  Honestly, it's been a very extended stressful period and personally, I haven't felt like writing about all the chaos going on.  When you're living in craziness, living it is enough, you don't necessarily want to write about it too.  At least that's how it is for me.  I know a lot of people are able to take turmoil and shape it into their creative outlets and create something good from it, but that hasn't been the case for me. I tend to get overwhelmed and it creates a creative block.  Frustratingly, this applies to both my blog and my other creative outlets.  I've done a few small art projects here and there, but the animation front has been extremely slow for a while.  It's not for lack of desire, I've been wanting to make something, but the spark just hasn't been there.  I've been aware of it and trying to overcome it, but it's easier said than done.

Even though I haven't really done any animation in quite some time, something I worked on was recently released and I can't say enough how proud I am to be part of the project.  A few years ago, America Young asked me to do a tiny bit of animation for a movie she was making.  America is one of those people who is so fantastic on every level, I'll jump at the chance to help her out in any way I can, so of course I did just that.
A couple months ago, The Concessionaires Must Die! was finally released into the world.  It's currently available pretty much anywhere you might find yourself digitally purchasing a movie.  ITunes, Amazon, Xbox...  Have a look and you should be able to find it!
It's good, heartfelt, nerdy fun and I'm so happy I got to have even the tiniest hand in bringing it to life.  Seek it out, take a look, enjoy, and when you see those dancing snacks, well, you'll know that that was my little contribution.


While things have been slow and difficult on the creative front for a while now, I feel like the tide is beginning to turn in unexpected and potentially exciting ways.  Over the past few months, ideas have been beginning to spark.  New ideas that range across several different, tones, intended audiences, and types of media.  It feels strange that after spending so many years primarily focusing on animated projects, nothing I'm doing right now has anything to do with animation whatsoever.  Though strange, the change is nice.  I feel like I'm suddenly working with a much broader canvas.

I don't want to prematurely go into too much detail regarding the things I'm working on, but I will say this- while one of the projects is still heavily centered on me creating visual art, the others, so far, have had me focused on writing.  I haven't actively written a story since I wrote The Girl and the Ghost.  The shift has been a bit bizarre, but honestly, I've been loving it.  I don't think I've ever experienced something like this where the story has just been pouring out of me and all I can do is try to keep up with the words.  I really feel like something special might be happening right now and I can't wait to share it.

So, yes, that's where things stand right now.  It's a short blog post and I don't have much to show at the moment, but after a long drought, I feel like new, hopefully good things should be coming to light in the not too distant future.

Fingers crossed.
Posted by jacobdrake at 5:59 AM No comments:

Happy Birthday.
Miss you.
Love you.
Posted by jacobdrake at 5:28 AM No comments:

Fifteen years ago today.
Miss you.
Love you.
Posted by jacobdrake at 4:49 AM No comments: