My MacBook rules. Flat out. Without a doubt. No ifs, ands, or buts.

I'm finally able to play The Sims 2 and I'm addicted. I'm a police officer on the vice squad, I married Andrea Corr, and we have a son named Fernando. 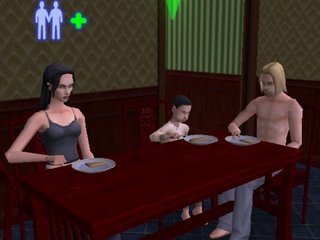 I've also been having lots of fun with the built in iSight and a program called Photo Booth. It lets you take snapshots and warp them in various ways in real time. I now have a bunch of creepy pictures of myself. 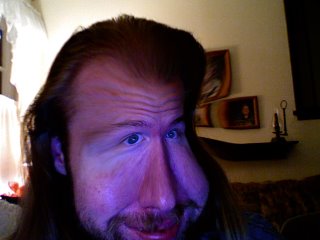 I've got my iTunes library all set up and organized, including cover art for the cool new jukebox-like feature. It's not really important, but man, it looks slick.

So, I've set up shop on my new computer, now it's time to get to work again. If only the writing bug would bite me.

That wasn't meant to sound mean, I have no animosity toward the writing bug. You know what I meant.
Posted by jacobdrake at 5:15 PM