Another alarm-free morning. I actually managed to wake up with loads of time to spare before check out. Can you believe it?
Granny and Maude weren't too far behind in waking up this time.

It was a dreary day. The sky was full of clouds and the occasional drizzle would sprinkle down randomly.
At least the rain held off until our driving day. 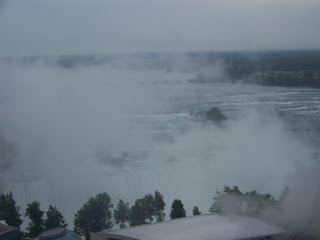 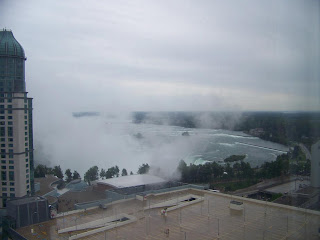 As the girls got started packing, I sat in bed for a bit, snacking on leftovers, shaking the cobwebs out, and checking out my souvenir from the night before. 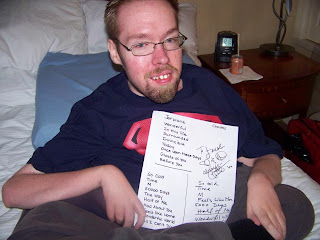 Shortly later, I was up in my chair and everyone was packed and ready to head home.
Mom called down for a luggage cart and I took a last look at the view, as I always do. 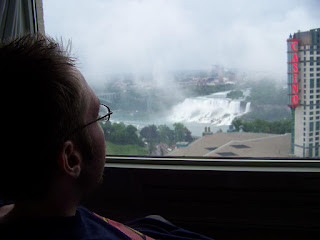 We waited. And waited. And called again. And waited some more.
It was about 45 minutes until the luggage cart arrived. At least it was cool that our buddy Stu ended up being the one to bring the cart and help us head out.

Before loading up the van, there was one last stop to make. We had to stop at the front desk to have them fix the bill, as they never adjusted it after we were downgraded.
I hate to be negative, but I really wasn't impressed by the Hilton. Maybe I've just been spoiled by how smoothly past trips have gone, but staying at this hotel just seemed to stress me out. I can't really see myself staying there again.

By the time we got everything squared away with the bill and packed up the van, we hit the road around 2:00 PM.

The drive home was pretty routine. We stopped at Duty Free, I grabbed myself a few bottles of Jackson-Triggs (I loves me some Gewürztraminer), and crossed the border back into the States.
The rain had stopped by the time we stopped to eat in Angola.

After Angola came the long stretch of the drive. Granny and Maude dozed off in the back of the van, so for most of the ride, it was just me, Mom, and my iPod.

We reached Ohio and Maude was the first to be dropped off. Then Granny. Mom and I finally arrived home at 8:00 PM, officially bringing the trip to a close.

Even though I was stressed out a lot on this trip, it was still a good one and I did have fun. We took Granny to her second concert, she had her first long island iced tea, we saw the sights, and had lots of laughing fits.
Good company, good food, good music, good drinks. It was a much needed and greatly enjoyed getaway.

As always, until the next one...
Posted by jacobdrake at 9:20 AM