Christmas Consumer Chaos and The Keg. In Canada.

Looking outside, there was none of the predicted snow to be seen, just a dreary, rainy day. 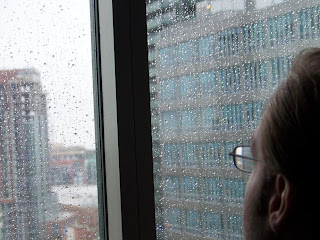 I hadn’t seen my cousin, Mark, in about five years. He lives near Toronto, so we were planning to meet up that day. Mom called him to see what was going on- that was when we found out where all the snow went. He was completely snowed in and unable to get to Toronto.
That was a bummer. Hopefully we’ll be able to get together another time soon.

We decided to head over to the Eaton Centre again and spend some time actually looking around.

To avoid the rain, we headed back down to the PATH, this time successfully passing the elevator roadblock by removing my leg rests.

It is...chaotic in the PATH. The fast-paced hustle and bustle of the people combined with the somewhat confusing layout can get you turned around pretty fast.

Luckily, we found our way to the Eaton Centre relatively quickly. The chaos continued inside, where three floors of Christmas shoppers frantically darted in every direction.

We wandered around for a while and stopped in the food court for some ice cream. As we finished, I heard a voice from behind asking “Are you Jacob?” It turned out to be Angela, a MySpace friend of mine who was also at the concert the night before. We didn’t get much time to talk, but it was still a cool, unexpected meeting. 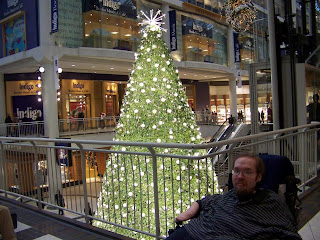 The top of the giant Christmas tree 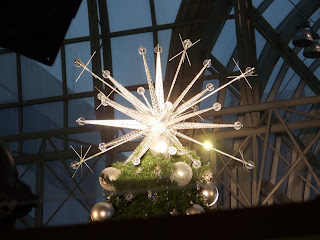 The star at the top
Back to shopping mode, I set out to find a replacement iPod adaptor for the drive home. The best looking one I could find was pricier than I had hoped, but Mom and I went halfsies on it, which lessened the sting a bit. (Of course, I later found out it was three times the price I would’ve spent if I had waited and bought it on Amazon. Ugh.)

Before leaving the Eaton Centre, I bought one of Dala’s CDs and saw the DVD of Dr Horrible’s Sing Along Blog for a good price, so I grabbed that too.

We headed back to the hotel for a bit, only to see severe weather warnings plastered all over the news. Apparently, the majority of our road home was set to be hammered by lake effect snow throughout the next few days.
This raised the question of whether we should still leave the next day, as planned, or stay in Toronto and wait it out.
We agreed to play it by ear.

Having only eaten that ice cream at the food court, it was time to get some dinner. We loved The Keg in Niagara Falls, so we went down to the front desk to ask if there happened to be one near the hotel. They gave us directions and we were on our way.

It was only about a ten, maybe fifteen minute long walk, but the constant icy winds made it feel much, much longer. My driving hand was frozen by the time we arrived.

The place was packed. They had a table pretty quickly, but it was a pretty cramped path, everyone would have had to stand up and push their chairs in for me to get my wheelchair through, so we ended up wait waiting 45 minutes. I snagged a spot near the fireplace, so I didn’t mind the wait. Thawing is nice. 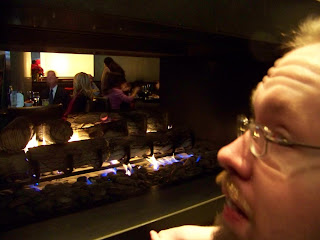 Dinner was great, I got the teryaki chicken and three cheese baked potato with Jackson-Triggs chardonnay. Totally worth the long, cold trek to get there. 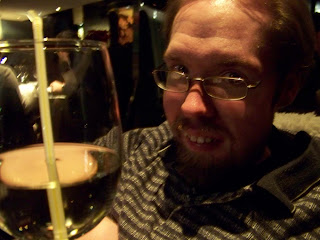 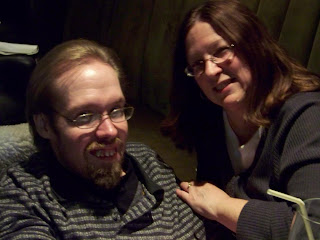 The walk back seemed much quicker and warmer, most likely thanks to the wine. We even paused to snap a couple pictures of the awesome Christmas window displays at The Bay. 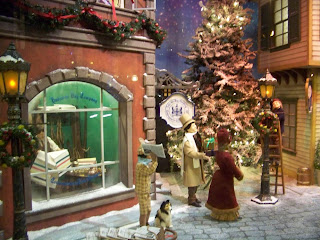 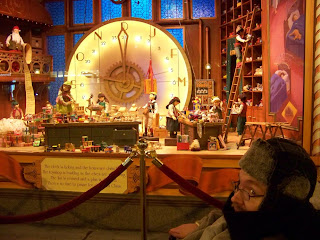 We got back to the room at 10:30 and just decompressed for a while. Flipping around on TV, we managed to catch the day’s installment of ET Canada’s feature on Chantal and Raine’s vow renewal, so that was cool.