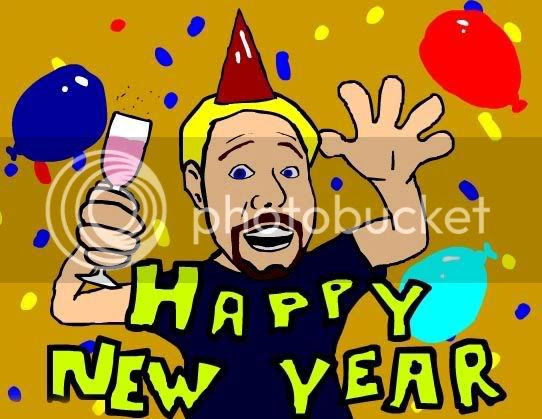 Well, I don't know about you, but my 2005 has gotten off to a hectic start. We had a nice Christmas, Jolly Ol' Saint Nick was good to me. After a quiet New Year's Eve at home with Mom, I had a nearly constant flow of company visiting. Over Winter Break I even met three new friends!

Uh oh, what's this? I think...yep...I feel a shoutout coming on, watch out! Hey Bridget, Adrienne, and Eric!

Okay, the shoutout's over, is everyone okay?

So this weekend was the big finale game night before everyone headed back to college and it was good. Hands were tested, thumbs were blistered, and Jeff was named the new commissioner of our Playstation 2 wrestling league.

The following day I was just in a bad mood, feeling a bit down. 11 PM rolls around and I decide to get comfy, watch a DVD, and chat a bit on my laptop. So I get comfy, I get my laptop...it won't start, it just shows a blinking question mark. Obviously the work of the Riddler. So I give Batman a quick call to see what's up, but apparently the Riddler prefers Windows. That blows that theory, so I immediately call Corey, a fellow Mac user, to see if I can get a nugget of wisdom from him.

"You're screwed." Not exactly what I was hoping for, but hey, at least he's honest.

I went on my PC to see what help I might be able find online. I found a few things, tried them all, none worked. I worked until 3 AM before quitting for the night, not knowing whether or not I had just lost everything I had spent so much time working on. No, I didn't have backups. I know, I know, shoosh.
Oddly enough, I had been planning all last week to buy a nice big external harddrive, just incase anything like this would happen. The day I had decided would be good to order it...yesterday. Irony. Ha.

Yesterday, the first thing I did after waking up was call the Apple help line. The lady was very helpful, but extremely dry. This was a prime example of why I hate phones. I tried to lighten things up with a couple quick one-liners and I'm pretty sure I heard crickets chirping at the other end of the line. I swear I heard her sigh a couple times like I was interrupting something. What a fun conversation.

Anyway, after a fifteen minute phone call and about an hour of work, my laptop's back on track and none of my info is lost. I DO have to re-update my system though. 97 MB on a dial up connection, I'm getting excited just thinking about it.

Y'know, I've had this laptop for a while now and aside from a few hiccups, she's been really good to me. I think she deserves a name, anyone got any name suggestions? C'mon, consider it an assignment, folks. Bring on the names!