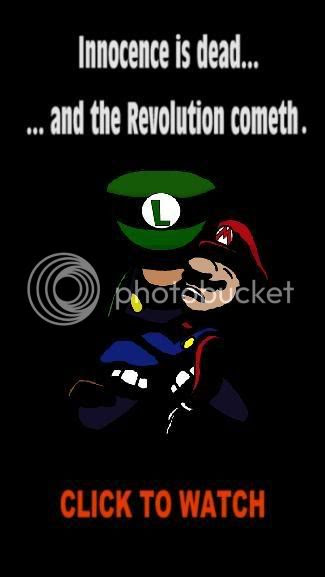 This past Monday, I finally saw the final cut of the cartoon. The DVD came in the mail early in the day and I found myself unexpectedly nervous. I sat with the DVD on my desk all day, wondering how it was going to look and how I was going to feel about it. At about 6 PM, I popped it into the DVD player and my family gathered around.
From the moment it started until long after it ended, I sat and grinned like a dork.
I really can't wait for thing to go up on ifilm so you can check it out. It'll be online soon.

I'm happy to say I'm typing this entry from my newly repaired iBook. Once we finally got an appointment, everyone was helpful and the service was super fast and smooth.

I'll update you guys on the cartoon ASAP.
Posted by jacobdrake at 4:19 AM No comments:

So, my beloved iBook died on me last week. It's happened before, but it's never been a big deal, I'd take it to the Apple Store and my extended protection plan would cover the cost. Simple as pie, right?

It's now become clear to me that though I love Apple computers, I hate the Apple Store.

Last Friday, the day after the iBook crashed, Mom and I drove up to the Apple Store to get things sorted out. Upon arrival, an employee of the store helped us sign in for an appointment at their self proclaimed "Genius Bar."

We waited paitiently as time passed. A seemingly endless amount of customers were called up to get their problems sorted out. 90% of the problems came down to people not knowing how to work their iPod they got for Christmas. One lady's big dilemma was...I kid you not..."How do I charge it?"
Are the instruction booklets that complex nowadays? I recall mine quite simply instructing me to...y'know...plug it in.

Time began to drag. Two hours had passed. We decided to ask if it was getting close to our turn. Turns out we were somehow put on a standby list, so basically if everyone else decided to leave, they'd call me up. Fantastic.

One of them had seen us waiting and knew they had messed up, so he snuck us up there a few minutes later. He tells me my logic board is a goner and needs to be replaced. $300 and 1-2 weeks.
I just had my logic board replaced last year. Apparently a bunch of the logic boards they made were defective, so they replaced them for free. Kind of odd that my defective one lasted longer than its replacement.
I asked if my protection plan covered this and found out it expired in August. I argued that I renewed it and was told it doesn't go beyond 3 years after the original purchase.
Wonderful.

I headed home with my dead laptop to debate whether I should have it fixed or just get a new one.

After a few days, I decided to get the repair now and look into a new one when I can better afford it.

Mom and I headed back earlier today to have the laptop shipped out. We signed in at 2 PM and saw we'd be helped at...7:30?! A 5 and a half hour wait?!
It didn't look crowded, so we decided to wait a bit and see if we might get in sooner. After an hour (and countless more iPod "problems"), I said "Screw this." We asked if we could get an appointment for tomorrow and he said I'd have to do it online. Works for me. With that, we were out of there.

So, I'm sitting here tonight and decide to head to Apple's site to schedule myself for tomorrow. What message do I get?

"We're sorry, due to higher than expected support traffic in our store, we will not be able to provide you with assistance at this time."
I am not a happy customer right now.
Posted by jacobdrake at 5:48 AM 2 comments: