Well, it's been a while since I've blogged. Why? Because my days have been pretty boring. My change-of-season-sickness turned into a sore throat/cough/ear infection/sinus infection...thing. It ended up hanging around in some form for about two months. Thankfully, it has FINALLY passed as of recently. I am still fighting with my ear as it continues to randomly plug and unplug. Fun, fun, fun.
Oh, and I also got my swine flu shot two weeks ago today, so hopefully I won't have to worry about sprouting a twirly tail and feeling the urge to roll around in the mud.

So, the major frustration of the long sickness (besides being sick), is that my work on The Girl and the Ghost was delayed. Bigtime. I had hoped to have it finished by the end of the year, at least the actual animation phase, but that's pretty unlikely now. It WILL get done though. This one has been far too long of a journey to turn back now.

Some recent highlights have included Halloween and Thanksgiving. Halloween was great because little Matthew made me proud and dressed up as Superman.
Check this awesome little nugget out. 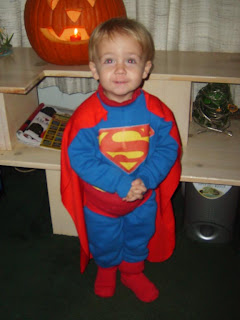 I also carved a Jeff-Goldblum-O-Lantern. 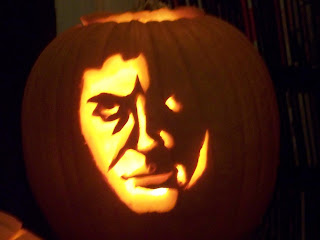 Thanksgiving was nice, I had fun just chilling out with all the family. On top of that, it was also Matthew's second birthday. It was a blast to watch him open his presents and dive into his cake. Can't believe the little bugger's only been around for two years, it kind of feels like he's always been here. 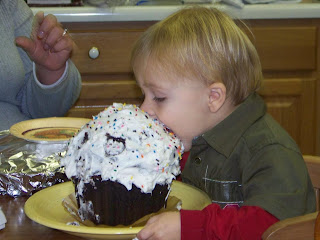 As one of my gifts to him, I made another video to follow The First Four and The Following Fifteen. Here's Eighteen Through Twenty Four.

http://www.youtube.com/watch?v=Ly7y7vqqSAQ
Thanksgiving weekend was rounded out with lots of hanging with the gang. It was the first I've gotten to hang with Corey, Eric, Brendan, Jeff, Mikey, and Mo all together in ages.
Twas a good time. 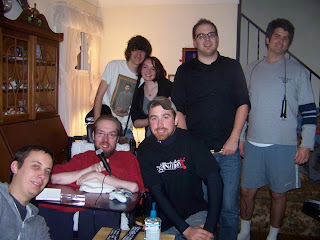 There's also a bit of big news I'm excited to share. A couple weeks ago, Larry, Aaron, and the guys headed out to LA for a week of meetings. On November 19th, I got a text from Larry that read

You can read Larry's account of the trip here.
http://www.facebook.com/home.php?#/notes/larry-longstreth/onward-to-awesomeness/207207984601

This is so mind-boggling to me that my brain has yet to fully process it. It'll definitely be interesting to see where our projects go in 2010.

But before that? Christmas. I'm really looking forward to it this year. I'm ready for some Christmas spirit.
Posted by jacobdrake at 11:26 PM No comments: