Three years ago, we saw X-Men 2 in the movie theater. It was the last time we went to the movie theater together.
Now, by some strange coincidence, X-Men 3 is opening today, on the third anniversary of your passing. I'll be there thinking of you.
Three years.
I miss and love you.
Posted by jacobdrake at 4:21 AM No comments:

This just in: I now have an official listing on the Internet Movie Database!
Check it out, kiddies!
http://imdb.com/name/nm2227706
Posted by jacobdrake at 2:11 AM 1 comment:

Email ThisBlogThis!Share to TwitterShare to FacebookShare to Pinterest
Labels: IMDb

It's been a while, eh? No blogs, no reviews, no site updates. First impressions might suggest I've just been lazy, but on the contrary...brace yourselves...I've actually been really busy.

Nintendo: Old School Revolution exploded at iFilm since its debut. To date it's been viewed over 380,000 times at iFilm, not to mention it's popped up on countless other sites across the web.
I knew Revolution was going to be good, but its success has blown my mind. To top it off, the film was recently added to the Internet Movie Database. How cool is that?

After finishing up my work on Revolution, I animated a logo for the folks over at Twitching Monkey Productions. You can check it out here.

After finishing that up, I worked on another animated short with The Brothers Longstreth. This time around, we attempt to answer the age old question: How many licks does it take?
Ladies and gents, I give you...Tootsie Blow Pop. 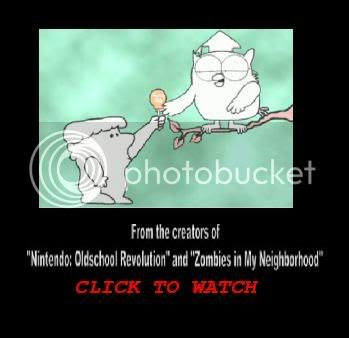 And if that's not enough, I'm slowly nearing completion on our third animated short. The title is...ready for this?...Batman's Gonna Get Shot in the Face.
Yep. That's the title. And y'know what? It's gonna be good.

Well, I best get going for now. I'll try my best to update the site more often, bear with me. Until next time, hang in there!
Posted by jacobdrake at 6:17 PM 1 comment: