At the last minute, I got a quick and easy costume idea that I'm confident nobody else anywhere was wearing tonight. I decided to go as... 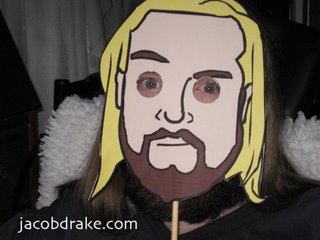 (click for full size)
And now for my pumpkin. The star of my most recent short...
Batman! 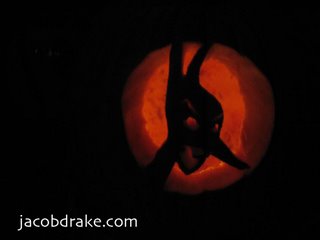 Ghosts in the Machines?

Technology hates me. I no longer have any doubt in my mind about that.

Our TV (only 5 years old) died back in July, then the one we put in its place died, leaving us with a ridiculously tiny one. It looks like the old TV got pushed back about twenty feet through the wall.

I listen to music as I go to sleep. I pick the CDs that'll help me relax, press play, and drift off. It's just what I do.
From the beginning, my stereo (only 3 years old) never worked quite right. It would skip songs or entire CDs for no apparent reason. Sometimes it wouldn't even read a CD. It was pretty much just a minor annoyance, then it got worse...after the warranty expired.
A couple nights ago, it died completely. Dad opened it up and found the wires warped and discolored from heat as well as a hot smell to it.
Toast.

I haven't gotten a new video games in nearly a year. So, what happened when I recently got one?
If you guessed "the Playstation 2 died before I ever got to play the game", give yourself a gold star.

I love electronics...when they, y'know, work. Is nothing made to last anymore? This stuff costs so much to repair, you might as well just replace it. If you can afford it. Which I can't.
Bah.

I can't believe it's Halloween already. Where did the rest of the year go? This is the first year I haven't dressed up in at least a thrown together costume. We'll be carving pumpkins in a bit here and handing out candy later, though I doubt we'll get many trick or treaters with the chilly and rainy weather.
After that? Veronica Mars, Boston Legal, and tonight's live episode of Ghost Hunters. Low key, but works for me.
I'll probably watch Silent Hill tonight too, gotta have a scary movie. Reviews seem mixed on the movie, but I'm a fan.

Maybe I'll put up some pictures from Halloweens gone by a little later.

Have a fun and safe one!
Posted by jacobdrake at 2:25 PM No comments:

I haven't posted an entry in a few days. I wish I could offer a good excuse, but the only one I have is that I've been excessively bored.

It's been cold, windy, rainy, and snowy these last few days. Add to that that there's really nowhere to go around here that really interests me and I'm sure you'll get the picture that I'm already going a bit stir crazy. And it's not even November yet.

As I've said, I don't like the cold months all that much, but I am looking forward to November for two specific reasons:
I'm still keeping myself really busy writing. I've written the next installment of Ask the Reading Monkey, I finished a poem for a friend, and I'm working out some ideas for possible film projects.

Along with all that, I'm also re-working my script. I was given some brilliant and very helpful advice from Rachel, who voiced Batgirl in Batman's Gonna Get Shot in the Face.
I took a few days off between drafts (as Larry advised) and like magic, I felt the creative spark. A tweak here, a minor change there, and I can already see some drastic improvements. It's always nice to have friends who know their stuff. Thanks, guys.

In the spirit of Halloween, I'll leave you with something kinda scary. Check out this creepy (and seemingly pointless) commercial for the upcoming Playstation 3.

Posted by jacobdrake at 3:49 AM No comments:

Weighing in at 95 pages long, this draft of the script is finished! I'm extremely pleased with it, but of course, it still needs some fine tuning.

I was a bit nervous sending it to Larry for feedback, but to my surprise, he really liked it. Larry's not one to hide it if he doesn't like a movie, so this was a big confidence boost for me.

Not quite sure what the next step is, but I'm excited.
Posted by jacobdrake at 6:41 PM No comments:

Email ThisBlogThis!Share to TwitterShare to FacebookShare to Pinterest
Labels: film, Larry Longstreth, script, The View From Down Here

After about a week, my cold is finally gone. I still have the occasional cough, but it's done for the most part, thankfully.

I can't believe it, we got the first snow of the year today. Granted, it didn't stick and only lasted for a couple minutes, but it snowed. It was 70 degrees just a couple days ago.
Ohio.

The current draft of my script is just a couple pages away from completion. It'll still need some tweaking and polishing, but progress is progress.

I've been trying to write steadily, but keep getting distracted by my recently purchased box set of Scrubs: Season 4 and my resurrected addiction to Snood. Curse those freaky little faces and the joy of firing them from their cannon!

Back to work. Focus, Jacob. Focus.
Posted by jacobdrake at 6:56 PM No comments:

Email ThisBlogThis!Share to TwitterShare to FacebookShare to Pinterest
Labels: cold, script, Scrubs, Snood, snow, The View From Down Here

I've got a cold. A nasty, all encompassing, annoying cold.

My sinuses are working like there's no tomorrow, my nose hurts, I feel the start of a tickle cough coming on, and my head just aches.

I woke up at 8 AM today. I think it's been about a year and a half since I've gotten up that early. It's a result of me falling asleep early last night, which was a result of not being able to sleep at all Saturday night.
I normally stay up all night working on my various projects and head to bed around 6 AM.

I'm all messed up.

I've realized one thing today: daytime TV blows. I've never gotten into The Price is Right, the kiddy shows on PBS are kind of terrifying, and they've changed Family Feud. John O'Hurley is the host now? Peterman?
I can't keep up.

Okay, I better get back to my orange juice.
Posted by jacobdrake at 11:23 AM No comments: