The Cleveland skyline took the form of a muted grey silhouette set against a grey, cloud-filled afternoon sky. The rain storm had traffic heading into the city at a standstill and Mom and I were stuck in it. It was August 20th, 2009 and we were on our way to see Our Lady Peace at the House of Blues.

It had been four years since I last saw them in concert and I was ready for another dose.

Thankfully, the rain had stopped by the time we arrived and found a parking lot. Upon entering the House of Blues, we were led through the hallways toward the main lobby. I got pumped as I heard the band through the walls, they were playing Naveed during sound check. From the lobby, one of the guys from the crew took us down in front of the stage, where we watched the guys warm up for the show with old favorites and new stuff from their current album, Burn Burn. From just hearing the sound check, I knew it was going to be one hell of a show. 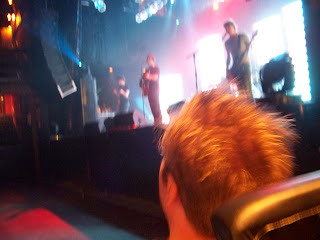 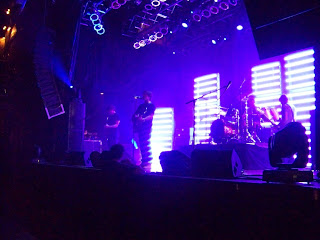 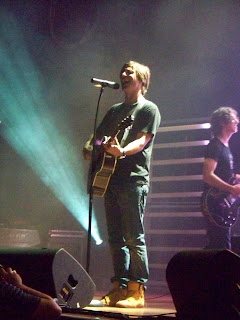 When they wrapped up, Raine made his way over and chatted with us a bit, mostly about animation and movies, before helping get our seating arrangements squared away.

Eventually, we meandered over toward the other side of the room and talked a bit with Jeremy, Duncan, and Steve before snapping a couple pictures with the whole band. 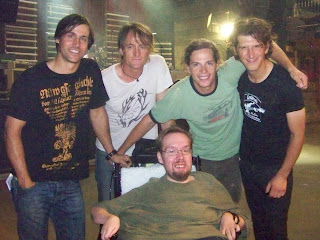 It was a blast, they're all great guys.

From there, Mom and I decided to get some dinner in the House of Blues restaurant before the show. We ended up eating with Gail, who I haven't seen since Raine's concert in Buffalo. It was a nice little reunion.

As we finished eating, we noticed it was almost time for the doors to open, so we headed in and assumed our position by the front of the stage.

A little while after the audience had filed in, Meese opened the show. 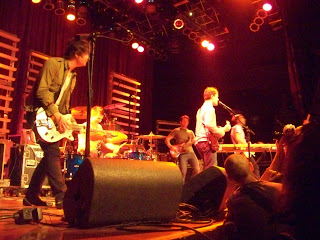 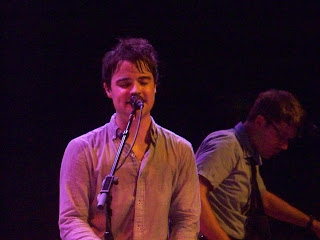 I hadn't heard of them before this show was announced, but I thought they sounded pretty good. I liked their set.

When Our Lady Peace took the stage, they didn't waste any time and started the show strong with Monkey Brains.

http://www.youtube.com/watch?v=rk0QLTPFg6U
Between the excellent song, the power of the sound, and the crazy light effects, I was already blown away. 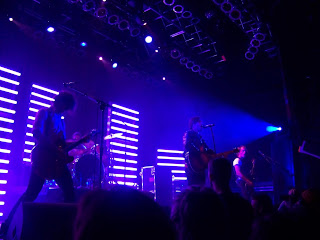 It was a really strong and amazing show, the setlist was like a "best of", drawing from all of their past albums and the new one. There was never a lull. 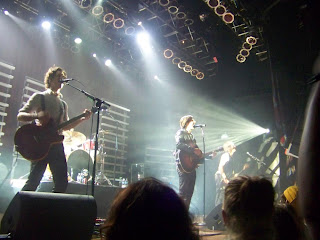 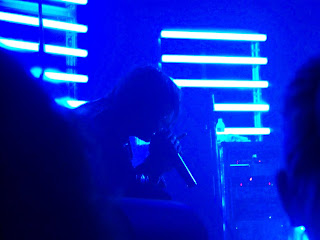 Raine's always had a habit of climbing some part of the venue during their shows and this night would be no exception.
Towards the end of the set, during All You Did Was Save My Life, he made his move.
Unable to reach the balcony from the stage, he ran up the stairs and hopped the rail, walking along the ledge while singing.

When it came time to get back down to the stage, he walked back the way he had come from. Mom aimed the camera at the stairs so she could get a shot of him coming down, but he never appeared. It was then that I noticed everyone looking up. When I joined in and looked up, all I saw were the bottoms of Raine's boots dangling directly above me as he attempted to climb back down.

"This is awesome!" was my initial thought. Then the possibility of Raine dropping onto my face crossed my mind and replaced the first thought with "This is going to hurt."

As he swung in the air, Mom reached over and pushed his feet toward the barricade in front of me. He managed to touch down on the barricade and hop back onto the stage.

It was seriously great.

To make it even better, Mom managed to keep recording through the whole thing. Check it out.

http://www.youtube.com/watch?v=YpL0FC8JJVc
They finished the song and "ended" the set before returning for an encore consisting of In Repair and, of course, Starseed. The second unexpected awesome moment came during Starseed, thanks to an enthusiastic audience member named Trevor. No description would quite do this justice and thankfully, Mom was recording, so take a look.

http://www.youtube.com/watch?v=pGUdxdhjCY0
It was an incredible show. The guys sounded great and the energy, both on stage and from the audience was insane. The whole night was an experience I won't be forgetting.

To cap it off, the security guard we made friends with during the show was kind enough to snag the setlist for me at the end.

In the lobby after the show I spotted Trevor energetically trying to convince security to let him go backstage (no dice), said my see-you-laters with Gail, and even met and snapped a quick shot with Meese. 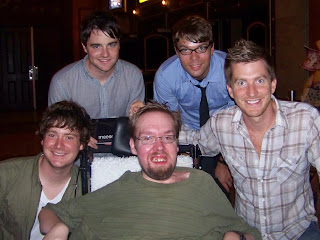 Mom and I left the House of Blues and headed back towards the van. On our way, we ended up bumping into Jeremy in the alleyway. He thanked us for coming out to the show and signed the setlist for me. That was a really cool little moment to end the night.

With that, we hopped into the van and aimed for home, buzzing on the post-concert rush and looking forward to seeing Our Lady Peace when they come back to Cleveland. Hopefully it'll be sooner than later.
Posted by jacobdrake at 12:55 AM No comments:

A Picture, Some Video, and a Ghost Update

Haven't been blogging much lately, since I finally jumped back into animating The Girl and the Ghost again. Animation resumed on August 5th and I've been going full force ever since. Until last Thursday, that is.

I sent the MacBook in to get checked out before the warranty ran out. So, I've been on my old iBook ever since. It's been killing me to not be able to animate (or watch YouTube videos, or play games, or do anything entertaining) for the past week. It should be back soon though, then it's back to work.

Animation-wise, I recently passed the 500 hour mark and have just over six minutes of completed footage. I'm usually extremely critical of my own work, but I honestly love how this is looking. It's finally coming together and actually feels like a movie. Can't wait to finish it and get it out there. For now, here's a still shot. 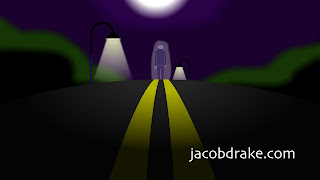 http://www.youtube.com/watch?v=PpftKra7PUk
The computer downtime, though annoying, was timed well, as this past weekend was my birthday weekend. I was busy hanging with Corey, Eric, Mikey, Brendan, and Jake. Even got to see Aaron for the first time in ages on Sunday.
Much Rock Band was played and much fun was had. Thanks, guys.

I saw Our Lady Peace in concert on August 20th and had an amazing time. There's a detailed blog entry about that on its way as soon as I'm back on a computer better suited to handle pictures and video. For now, though, here's their latest music video.

http://www.youtube.com/watch?v=2nK4MwL5p_o
Now, I better go get some rest. I'm in the middle of my usual change-of-season sickness.

More soon.
Posted by jacobdrake at 5:18 AM No comments: