Full Plate. Here, Have a Bite.

It's getting busy again, kiddies. The projects are a-stackin', so I'm gettin' crackin'.

Currently, I'm finishing up work on an animated intro for Larry and the gang's upcoming comedy sketch show, Dolly Oxem's Traveling Video Circus. From what I've seen, I can tell you it's going to be bizarre, ridiculous, and hilarious. They're sort of going back to a style similar to their classic Eyeball Papercuts days, but applying all the things they've learned about filmmaking in the years since. I can't wait to see the finished product.

As soon as I'm done with the intro (within the next couple of days), I'm finally going back to dust the cobwebs off of The Girl and the Ghost. It's been about two years since I put it on hold to focus on The Greatest Fan Film of All Time.
I haven't resumed animating it yet, but I have spent the last few weeks slowly dipping my toes back into that world. Two years is a long time, creativity-wise. Ideas change, situations change, and the production of The Girl and the Ghost is definitely reflecting that. I've rewritten the climax of the story and the cast has some new blood in it.
Marisa Tomasic, who you'll remember as Cheyenne in The Wimp Whose Woman Was a Werewolf, is now on board as the female lead. I spent the past two Fridays with her, recording all the lines for her parts. Yes, I typed "parts", she's pulling double duty on this one and doing an amazing job. Can't thank her enough. 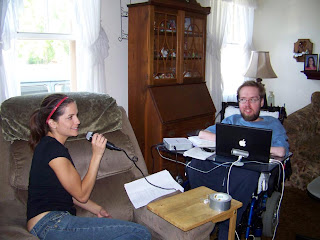 Recording with Marisa
And there's more lined up once that's finished. Remember my big dramatic announcement that I wouldn't be working on Larry's next animated project? Scratch that, I'm on board now. It's still a little ways off and the details are still being figured out, so there's not too much to say about it just yet. But yes, it's called Four Tanks and a Healer, I'm working on it, it will rock, and the Longstreth/Drake magic will continue. Or is it Drake/Longstreth? Drakestreth? Longdrake?
Whatever. It's continuing.

And somewhere in there, there's the new story idea I want to get moving on. I recently put together some concept art for it and I'm completely in love with it. It has me beyond excited, I've even had moments of temptation where all I wanted to do was push everything else aside so I could focus solely on this new idea.
I'll get to it though, hopefully sooner than later. Right now, it's the carrot dangling in front of me.
No, I don't like carrots, make it a soft pretzel. With cheese.

Here's something visual for this entry. I needed a break after animating a few nights ago and thought I'd have some editing fun.
During the editing process for Nintendo: OldSchool Revolution, there was a bit of quality loss in the picture. It bugged me. So, I went back to the original Flash files and re-rendered them in high definition, then edited the footage exactly as Larry did originally. The colors are vibrant, the lines are clear, and the lip-syncing is fixed.
Now, nearly four years after I began animation for it, you can finally see Nintendo: OldSchool Revolution in full quality, flaws and all. HD, baby.

Check it out and tell me what you think!

http://www.youtube.com/watch?v=RV1a_1ubJuo
So, that's what I've been up to and will be up to for the next little while. Who knows what other projects might sneak their way in there too?

Right. Gettin' crackin' now.
Posted by jacobdrake at 5:49 AM 1 comment:

Happy Birthday.
Miss you.
Love you.
Posted by jacobdrake at 3:46 AM No comments: