The tickets said the show started at 8:00. It was 8:30 and we were just leaving the house. A laughing fit started by Kris led to an oddly hilarious coughing fit on my part that put us way behind schedule. 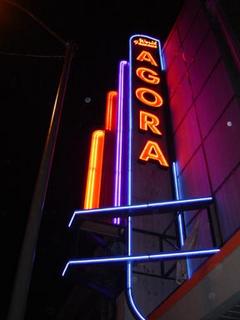 We got to the Agora around 9:00 and pulled around back where I normally go in. As we pulled up in the van, the parking lot attendant leaned in and asked "Are you with the band?" I'll admit, I was tempted to say "Yep!" and see what happened, but I wasn't feeling especially daring. He directed us around front and led us inside.

After waiting for a few minutes, someone came and led us to a table in the back of the venue. The first opening act, Pedestrian, had already finished and the second act, Danko Jones, was already well into his set. Not really my style and he seemed to be his own biggest fan, but he was okay.

Our table had a surprisingly good view, but it would quickly vanish as the crowd grew. That's exactly what began to happen after Danko finished. One guy in front of us assured us he'd keep the area in front of us clear, but the combined effects of the alcohol in his system and the massive amount of people proved to be unbeatable factors.

Shortly after 10:00, Our Lady Peace hit the stage, opening with "Picture," from their latest album, Healthy in Paranoid Times. They sounded great, but lights and backs were all I could see.

"Starseed" was awesome, but the view was frustrating, so Mom went to see if anyone could help us out. Five minutes later, as the band started playing "Al Genina," we were on the move.

A quick trip through a few doors and an alley and we were in the opera box, just feet away from the stage. A perfect view.

Raine and the guys were playing their hearts out and giving their all. They were also very interactive with the audience, something I love in a concert. Raine hopped out on top of the barrier in front of the stage, security guards and fans held him up as he sang "World On A String." Later, he called a couple girls up on stage and let them sit there because they didn't look like they were having a good time.

For "4 AM," Raine turned the microphone around and let the crowd sing the first half of the song as he strummed his acoustic guitar.

Towards the end of the show, my concert experience was complete when a beer fell from the balcony above and soaked my feet. Totally unexpected and pretty funny.

They closed with "Naveed" and were gone.

It was such a great show. I've seen Our Lady Peace twice now and they never disappoint. This was easily the loudest concert I've ever been to. My clothes were actually moving from the vibrations whenever the bass kicked in, it was wild.

Definitely a fantastic night, I look forward to seeing them again next time they're in town.
Posted by jacobdrake at 5:32 AM 1 comment:

Guys and gals, I'm excited and proud to announce that I've just joined a brand new project. Indie filmmaker Larry Longstreth has asked me to animate a short he wrote. I read and loved the script and didn't want to be responsible for messing it up. I took a week to whip up some test footage to see if I can do what he wants. I showed it to him tonight, to my surprise and delight, Larry and his crew loved it! So, I'm in and I'm pumped! This is gonna be good.
Go check out some of their past work.
Zombies In My Neighborhood
The Eyeball Papercuts
I'm so pumped.
Posted by jacobdrake at 4:51 AM 1 comment:

When I woke up, Mom and Kris were already hard at work packing.

Checkout was at noon, so we had to be ready. In a total reversal of how things normally go with us, we were actually ahead of schedule, so we decided to get a bite to eat before hitting the road.

We heard they had some kind of breakfast deal going on, so we headed across the street to Tony Roma's again. Eggs and orange juice really hit the spot. A nice bonus was their choice of music. Everything they played was something I liked. Imagine my excitement when they actually played The Corrs. It was a lovely little surprise and a great nod to last year's adventure.

Grinning as "Forgiven, Not Forgotten" plays
An unexpected source of amusement was actually our waiter. Picture, if you will, Moby. Now imagine Moby to somehow be about twice as mellow as he actually is. That was our waiter. As we paid our bill, we said "Have a nice day" and he replied "You guys..." (10 second pause) "...as well." For some reason, I just couldn't stop laughing after he left. Maybe you had to be there.

Cracking up
Back in the hotel room, we made sure we had everything and I took one last look at the view of the Falls.

We loaded into the truck and we were on the road at noon. I fired up my road trip tracklist on my iPod and we crossed the Rainbow Bridge to Willie Nelson's "On The Road Again."

The view from the Rainbow Bridge

Fake buffalo on the road out of Buffalo
It was a smooth, uneventful, and bee-less ride. As we drove through New York, we passed a small convoy of supply trucks heading down to New Orleans to help out with the Hurricane Katrina relief. That was a pretty cool thing to see.

Almost exactly three hours after setting out from Niagara Falls, we were back home. We were all so eager to get out of the van and move around a bit, it's amazing how stiff you can get after just three hours of driving. We unloaded the van and told Dad all about the trip.

Loungin'
After a little while as Dad was leaving for work, that strange sensation hit me where it felt like we had never even left. It really was a great trip, but it brings up one question: Where to go next year?
Posted by jacobdrake at 5:23 AM 1 comment: