Seven years ago today.
Love you.
Miss you.
Posted by jacobdrake at 6:08 AM No comments:

My brain may explode soon. I've been going nonstop for so long now, I thought I'd take a minute to update the ol' blog. It's been three months since my last entry. Shame on me.
So, what have I been doing?
Shortly after I last wrote, I snuck away for an awesome Toronto trip which will get its own entry (or entries) on here soon. Really. I mean it.
Upon returning, my aunt and uncle came down from way up north in Canada for a visit. It had been a few years since I last saw them, so it was great to spend some time with them.
A few days later, Larry, Aaron, Marisa, and I had our first 4 Reelz production meeting. Hmm... Come to think of it, I don't think I've mentioned 4 Reelz on here yet. Go to 4Reelz.com and take a look-see. 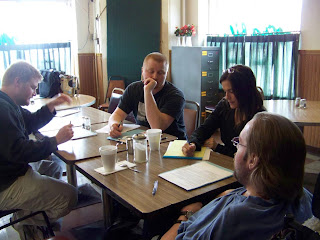 Anyway, the meeting was at Mirabile's, a little family-owned Italian restaurant. The neighborhood's not the best, but the place itself was nice.
After the production meeting, Vince and Travis joined us for some food and a table read-through of Four Tanks and a Healer. The food was great and they had me drinking homemade wine before noon, which helped numb the ache of actually having to be up before noon.
The read-through went nicely and we were ready. 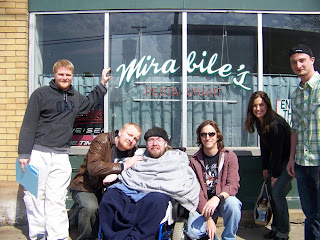 They recorded all the dialogue for Four Tanks the next day and I went back to working hard on The Girl and the Ghost. I had hoped to finish it before starting Four Tanks, so I would have one less thing to worry about. I got close, but it didn't quite pan out that way.
In the following weeks, Larry drove up and we recorded the last of his dialogue and I directed Aaron's recording session via Skype. 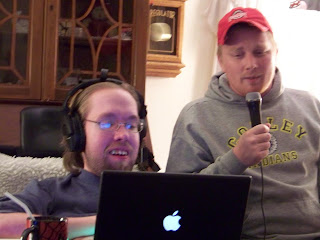 The animation is about 95% finished, but I got to the point where I had to start Four Tanks. So, right now I'm a little over a month in on that.
Here's a little teaser peek at Four Tanks and a Healer... 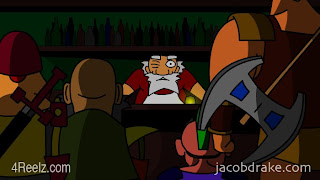 I'm working hard and putting in long hours so I can make sure this thing is as good as it can be. It's turning my brain to mush, but it must be done.
I'm a machine.
This weekend, I'll be recording the last of Marisa's stuff for The Girl and the Ghost and I'm going to see The Swell Season. Should be a good weekend.
I'll be blogging again soon and I'll be posting some long overdue Ghost goodies, so stay tuned. 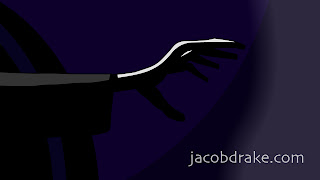 Posted by jacobdrake at 6:03 AM No comments: