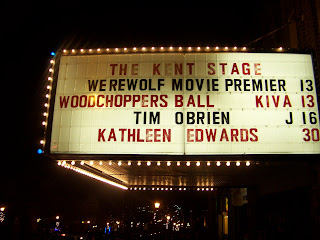 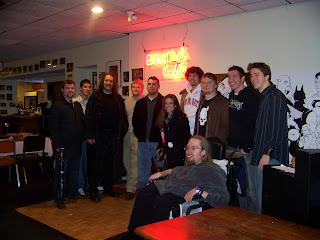 On my way to the premiere, hope this all goes well.

Be sure to head to DailyMotion.com around 9 PM tonight to see The Greatest Fan Film of All Time.

Here goes...
Posted by jacobdrake at 5:43 PM No comments:

For Those Who Can't Attend

As of Tuesday, animation for The Greatest Fan Film of All Time is finished. I finished the main footage at 10 AM on Monday morning, Larry came to pick it up for editing that night. He showed up with Clint and Vince around 9 PM. We expected speedbumps, but not in the amount we experienced that night while copying the footage. By the time we got everything squared away, the guys ended up heading home after 7 AM Tuesday morning. It was a long, frustrating night.
Now, we find ourselves in a mad rush to get the film finished on time. No pressure. We'll get there, though. One way or another.

Have you gotten your tickets yet? If not, grab 'em up!
http://kentstage.org/december.html#werewolf

For those who can't attend, you'll still be able to see Fan Film on Saturday night. Here's a new trailer to tide you over.

http://www.youtube.com/watch?v=G3Nz516HYEY
Posted by jacobdrake at 4:06 PM No comments:

The premiere is exactly one week from tonight. In dramatic fashion, we're cutting things a little close, but we're doing it. Larry finished up The Wimp Whose Woman Was a Werewolf a few days ago and I'll wrap up animation on The Greatest Fan Film of All Time tomorrow night/Monday morning.

I hit the 1,300 hour mark last night and have somehow managed to animate over 40 minutes of footage so far. I completely lost track of how many different characters I've put in there. This thing is epic. You'll see in just a week. Which reminds me, tickets for the premiere are now on sale at this link:

Get 'em while they're hot!

We want to fill this place up, so let's get some butts in these seats. Spread the word, bring some friends, tell them to bring friends (but not that guy, you know the one). If it sells out, I will personally hug everyone in attendance, and let's be honest, who wouldn't want a hug from a shaggy, wheelchair-bound animator?

So, yes, you go get your tickets and I'll go work on finishing this movie once and for all.

It's clobberin' time!
Posted by jacobdrake at 7:21 PM No comments: