Black and white, night and day
Left or right? Don’t know the way
One’s a dream, one is real
Both make me live, both make me feel
Can’t have both, maybe none
A choice awaits fore this is done
Soul is torn, mind’s at war
Heart’s at risk, can stand much more
Cruel decision, cruel to choose
If I should win, I’ll also lose
Guide my choice and help me see
Help me find what’s meant to be
Posted by jacobdrake at 3:10 AM 1 comment:

It's funny how something like silence, depending on your mood, can either be the most peaceful thing in the world or the most intimidating.

This is the kind of random thought that tends to frequently pop into my head. I figure since I have these sporadic brain farts, I might as well put them to some kind of use, so I think I'll start posting them here. Good idea?

-Jacob
Posted by jacobdrake at 5:02 AM 2 comments:

A Series Of Unfortunate Events At The Texas Roadhouse

So my family and I were sitting here in the ninety degree heat with nothing to do. We were all hungry and Mom pointed out that she got a $25 gift card for The Texas Roadhouse a few months ago. None of us had ever been there, so we figured we might as well go check it out.

I'd like to pause and point out that I tend to be hesitant to check out new restaurants. When I find one I really like, such as Anthony's, I stick to it. Sure, it might not seem very adventurous, but tonight kind of supported my actions.

We had heard from everyone that this place is great and normally there's a line of people outside waiting to get in. When we arrived there was even a sign above the door suggesting people call ahead before coming, but we were lucky enough to show up when there was no line. We got in and were quickly seated, everything seemed pretty cool, though the ridiculously loud constant flow of country music can wear on your nerves. We were actually seated right next to Willie's Corner, which is like a mini shrine to Willie Nelson, I'm pretty sure he's part owner of the chain.

We all ordered, I got myself a strawberry margarita, all was going smoothly...until the food began to arrive. My older brother was about to take his first bite of salad when he noticed a hair in it. Okay, gross, but sure, it'll happen from time to time. The waitress quickly replaced the salad.

A kid at the table next to us was celebrating his birthday and the waitress had everyone give a "YEE-HAW!" for him. I was there, so I thought it was only right to join in. It was surprisingly satisfying, I should really make more time in my daily life for a good "YEE-HAW!" every now and then. Anyway, at that same table was a guy who looked freakishly like Corey. I wasn't a "Hey, he looks like..." moment, it was more like "Is that Corey? Poor guy's delusional and thinks he's in New York City!" Corey, you have a clone.

The meal itself was good. Really good. Expensive, but good. Even with the $25 gift card it cost more than we're used to. Everyone finished and I quickly downed the remainder of my margarita so we could head out. Mom stood up and someone at another table informed her she had something on her shirt. I'll say. Remember in those old movies when some poor sucker would unknowingly sit on a freshly painted bench and end up with stripes all over the back of his brand new suit? This was like that, but it wasn't paint, it was barbecue sauce. Barbecue sauce smeared all over the back of Mom's white t-shirt. Judging by the placement, it could have only come from the back of her chair, which makes you wonder...why the hell was there barbecue sauce all over the back of the chair? Was the guy there before us just an extremely sloppy eater? Is this Willie Nelson's version of Punk'd? What gives?

Mom talked to the manager and we got a free Texas Roadhouse t-shirt. Maybe it was like a prize for the first family who could find the hidden hair and the secret sauce. It really wasn't that terrible, the food was great and the place was cool, I guess it was just one of those days. Besides, a free t-shirt and a blog entry came out of it!

-Jacob
Posted by jacobdrake at 5:04 AM No comments:

My day started with my yearly appointment where I basically go in to show I'm still disabled so I get my medical shtuff paid, it was an interesting experience. I'll spare you that story though, too odd.

As Mom and I left, I mentioned that I'd like to stop at Borders to browse some books. Mom thought she knew of a quicker, more direct way to get there. Roughly ten minutes later, we found ourselves on a long, straight road in the middle of a sparsely populated farming town. A roadside sign kindly welcomed us to Leroy Township. It's one of those places you always hear the name of, bu have never actually been there. It was actually a nice visual treat: little rivers and streams, endless rolling fields, cute farmhouses. There were a couple rickety old houses along the way which quickly had me humming "Dueling Banjos" to amuse myself. The one bad thing was the heat. It was a sunny, ninety degree day, even the wind felt hot as we flew down this neverending road.
I actually enjoyed our little detour, but Mom was a bit stressed. She handled it pretty well, but it's a sure thing that she should never be allowed to drive a truckload of nuns or small children anywhere. Mom's vocal stress relief would most likely result in shock-induced heart attacks or an impromptu exorcism attempt, from my seat it's a pretty funny thing to behold.

About a quarter tank of gas later we were back in familiar territory. "Screw Borders" was the mutual decision as we instead headed to Denny's to cool off. Listen up, folks- next time you're at Denny's, do yourself a favor and order the Chocolate Peanut Butter Pie. It's so ridiculously delicious, it must be terrible for you, but trust me, you won't care. Tell 'em Jacob sent you, then watch the amusingly blank stare you'll be met with.

On another note, when I got home tonight, I was fortunate enough to chat with the lovely Sara. She told me she had visited the site and my mention of her in a previous entry made her blush. So, it seems only fitting that I now do this... 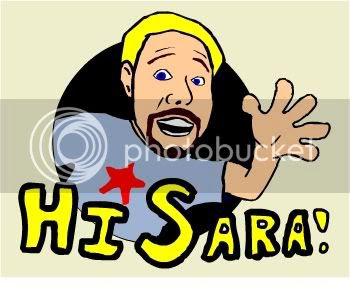 That oughta do the trick!

-Jacob
Posted by jacobdrake at 4:29 AM 4 comments: What a day. I got news that a few teachers and faculty members from my old schools were retiring, so I figured it was time to go back and visit my old stomping grounds.
The day began with a visit to my high school. It’s really hard to believe it’s already been five years since I graduated, it seems like it was just yesterday I was roaming those halls. It really hasn’t changed very much, the halls seem brighter and there’s now an ATM in the commons, which I found odd, but that’s about it. It was great seeing everybody again, it was also surprising to see how many new faces were there. The highlight was seeing my art teacher, Mrs. Vaughan.
I heard a shriek from a crowd of teachers and turned to see Mrs. Vaughan tossing aside what she was carrying and running up to hug me. We talked for a while and got caught up on what’s been going on, it was really nice. I also told her about the site, so if you’re reading this, howdy!
I saw my vice principal (who became principal after I graduated) and got to wish her a happy retirement on her last day, which was pretty cool. I saw so many people I used to see daily, it was nice to catch up.
From there my day led me to my old elementary school. This was a real flip out. Everything seemed so small. The halls looked shorter, the ceilings looked lower, the classrooms looked tinier. The weirdest thing though, was noticing how many of the teachers were so young. I’ll admit it, there were some rather hot teachers. Hey, I’m only human.
The highlight of this visit was seeing Mrs. Groene and congratulating her on her retirement. She was the nurse I had grown up with, over the years she became part of the family, so I absolutely had to visit her. We just sat, talked, and reminisced, it was great.
I then wandered next door to the middle school and bumped into Mrs. Smith, my health teacher. It was great to see she hasn’t lost any of her spunk that made her class so enjoyable.
Before leaving, I headed out to the playground behind the elementary school to take a ride down the hill that would give me such a thrill when I was younger. Yes, the hill seemed smaller too. I wouldn’t even classify it as a hill nowadays, but it still gave me a thrill, if only because I got to relive a little bit of my childhood. If you haven’t, I’d suggest you guys go visit your old school, it’s nice to take a trip to the past every so often.