Yeah, I know my trip recap is a little late, but here it is.

All packed up and ready to roll, Mom and I left around 1 PM on Tuesday the 7th, despite winter giving us its (hopefully) last hurrah. 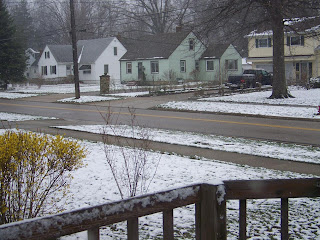 There's no way to sugarcoat it, the weather sucked. Especially for driving. It was the worst while we were still in Ohio. At one point, the snow was coming down so hard, we could only see maybe a quarter of a mile ahead of us. Observe.

http://www.youtube.com/watch?v=7PtlJemyWSM
It improved to just some flurries in Pennsylvania and a few scattered flakes in New York, but the wind never let up. As I've written in the past, Mom's a bit of a nervous driver, so I'm sure it was a long drive for her, but she did great. A couple hours in, we made our traditional mid-journey pause at the rest stop in Angola. I swear, they play no music in that Denny's unless it's at least 30+ years old. Honeycomb, anyone?
We sat, we ate, we hit the road and crossed the border into Canada. Thankfully, we were out of the snow, though the cold and wind stuck with us.
We got to the hotel some time after five and settled in a little bit. Mom sorted our stuff in the room and I checked out the view. It was really weird to look out at the Falls and see almost nobody walking around. Even weirder (but way more impressive) was seeing the massive ice bridge spanning the river at the bottom of the Falls. Take a gander, won't you? 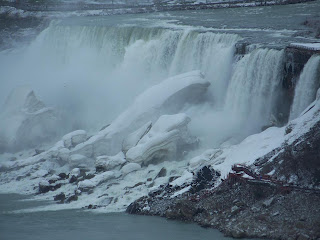 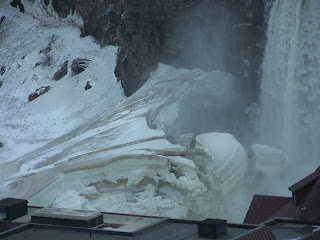 After a little bit, we headed off to St Catharines to wander the Pen Centre.

We didn't stay too long, as we wanted to be sure to have time to get back and have dinner at The Keg. The highlight for me was HMV, where they were having a sweet sale on DVDs. I picked up Sunshine and [REC].
We shopped around a little more, then back to the Falls and to The Keg inside the Embassy Suites. An awesome chicken dish and a glass of wine later and we headed back to the Marriott to crash before the big concert day.

I woke up to some bizarre Canadian children's TV shows. If I had caught the name of this one particularly odd show, I'd find and post a clip in a heartbeat. If my memory serves me, this one lady was supposed to be a doll or something and was dressed in a blue (or maybe purple) full body suit. The only part of her that remained exposed was her face and it was painted to match the rest of the costume. It was freaky, man.

Once we were up, we headed across the street to Tony Roma's for some lunchtime breakfast. It was a little less chilly, but the wind seemed to have picked up.
Tony Roma's was kind of a strange experience. When we got there, we were literally the only people there (excluding employees), yet the service was extremely slow. Seriously, after ordering our drinks (tea and hot chocolate), it was about 20 minutes before we actually got them. Don't get me wrong, I love it there, but that baffled me.
After finishing eating, we scribbled our names on one of the brick pillars (can you find them?) and aimed back toward the hotel.

You'd think crossing the street would be an uneventful thing. Not in this case. The second I got into the street, a gust of wind smacked me and I ended up with my sweatshirt and blanket blown up over my face. Mom quickly fixed it, but between the wind and how hard we were laughing, we had tears streaming down our faces by the time we made it across the street.
Finally, we made it back to room, got ourselves ready, and left for Brock University.

We were invited to get there early for the soundcheck, so we did. Upon entering the theatre, we were greeted by Karen Graves, so we sat and chatted with her for a bit. Not much later, Kevin Fox came in and joined us for a few minutes before the pair of them started soundcheck, as Chantal was still on her way and hadn't arrived yet. 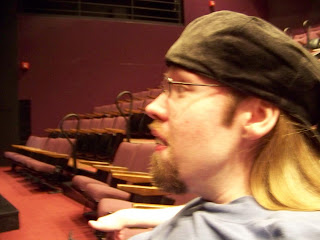 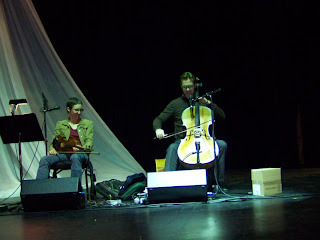 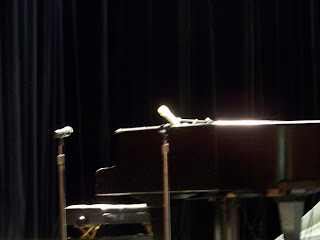 When she got there, we talked for a couple quick minutes and then she hopped behind the piano for another quick soundcheck. To my surprise, she turned to me and asked "What do you want to hear?"
I thought, smiled, and said "Something new."
Chantal, Karen, and Kevin debated for a few seconds and Chantal said "Let's play something that's not in tonight's set."
I was in musical geekout mode as she played a new song called Say the Word from her upcoming CD. It sounded fantastic, I really can't wait to get my hands on a copy of that CD.
They played around with the sound a little more and headed backstage to get ready, so we headed up to our seats.

Kevin opened the show with songs from both of his CDs, Come Alive and Songs For Cello & Voice, including covers of River and Sweet Dreams (Are Made of This). His set was great and it was nice to see him at the front of the stage. You should check him out at kevinfox.ca

At intermission, I met up with my friends from Chantal's message board, Elements. It was great visiting with Kathy, Sandy, and Terrence again, the first time since the Jackson-Triggs show. I loved finally getting to meet Angela, after years of corresponding online. As intermission ended, we agreed we'd meet up again after the show.

Chantal made her way onto the stage and kicked off her set with Leaving On A Jet Plane. This was the last night of a seven show tour and everyone sounded excellent. They even played a couple more new songs- Today and Half of Me. Have I mentioned I can't wait for this CD?
Chantal was extra chatty that night, thanks to a visit from "The Claritin Man." She was on a roll and had everyone cracking up all night.
Toward the end of the show, Chantal thanked a fan of hers, whose family sent Chantal a letter, explaining how her music helped this girl through some rough times. Then she thanked her best friend and followed that with thanks to "Jacob and his mom." She talked about how we come up from Ohio to see her. "They're always traveling that road..." she said, and then tried to remember which road it was. People in the audience started calling out freeway names before she finally said "Jacob, what's the road?"

For her last song, she explained that during the other shows on the tour, two of her sons, Rowan and Lucca, would come on stage and sing What A Wonderful World together. They weren't there that night, so Chantal sang it on her own to end the night.
Just for fun, here's a clip of Rowan and Lucca doing their thing at a previous show.

http://www.youtube.com/watch?v=CqHxKfBuzuE
I met back up with my Elements friends as the theatre emptied and Kathy once again surprised me with a setlist, this time, it was Chantal's. Thanks a million!
We eventually made our way out to the lobby and hung out for a few minutes and snapping a couple group pictures. Kevin and Karen even got in on the photo fun. 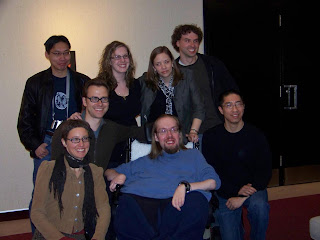 Eventually, we said our goodnights and our hope-to-see-you-in-Junes (Chantal's playing at the Jackson-Triggs winery again) and Mom and I headed backstage. Sadly, we just missed her, she had to get back to her kids in Toronto. Ahh well, next time. So, we said goodbye to Kevin and Karen and headed back to the hotel.

Before crashing, we scooted over to the Fridays in the Embassy Suites for our traditional last-night-at-the-Falls drinks and snacks. Such an excellent way to end a trip. 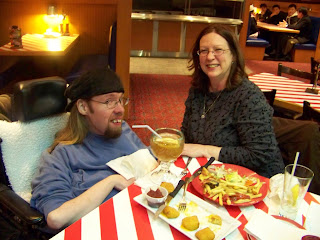 Thursday morning, we were up fairly early, which was nice , as some of the pressure to rush to get out on time was relieved. We ate some cold leftovers, packed our things, enjoyed the view one last time, and set out for home. 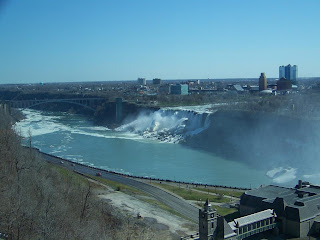 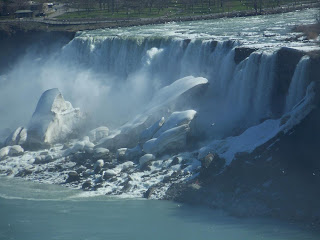 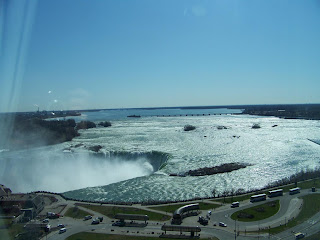 Thursday was actually a pretty smooth and uneventful day. It was a sunny day and much warmer, though it was still kind of windy.
We made a quick stop at Duty Free for some wine and a couple little gifts. The border was crowded, but the wait wasn't too long. It was the first time they've wanted to look inside the van, but even that was fast and we were on our way before very long.
It was a nice ride with wide open roads...except in PA. There was a traffic jam (with no apparent reason) that had us at a standstill for about 20 minutes. That sucked, but it was all easy going after that.

It was a great trip, I was definitely in need of a little getaway after this seemingly neverending winter. It was weird not being able to wander around and see the sights of Niagara Falls again, but hey, there's always June. 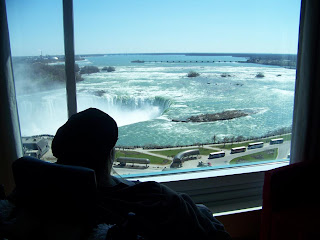 Posted by jacobdrake at 6:18 PM

Wow - Niagara Falls looks pretty cool with all the snow!