So, I'm still working on bouncing back from the pneumonia thing (and now, a cold on top of that), but I'm getting there and things are happening. I've been writing and Larry's been writing and there are new projects in the works. But they're still cooking, so stay tuned for more info on those.

On Monday, the folks over at Fan Cinema Today posted a review of The Greatest Fan Film of All Time.
My personal favorite part?

"Despite all the yuks, however, there are moments when the movie shifts moods. The flick starts out with baby Superman’s departure from Krypton, which is depicted with a melancholy that Richard Donner never managed to achieve. Later, too, when the bad guys have all but won, the tone is genuinely grim—not an easy thing to achieve in a fan film."
A scene from our fan film just got compared (and favorably) to a scene from Richard Donner's classic Superman film? A scene featuring Marlon Brando?
I can't wrap my head around that one. Wow. Just awesome.

If that's not enough, I got this text message from Larry on Tuesday.

"Stan Lee's people asked for fan film to show him"

I heard from Larry again today and I guess that'll actually be happening tonight.
It's insane. I seriously can't think about it too much, or I may go nuts. 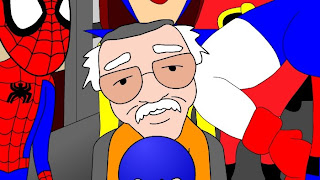 Posted by jacobdrake at 8:06 PM

NO way!! This IS big news, Jay! Keep us updated!